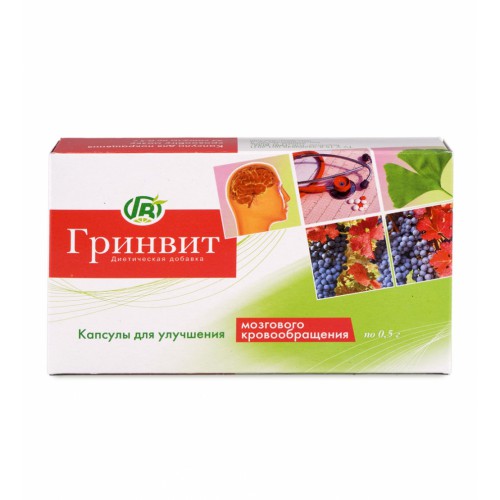 Formula for strengthening the nervous system.

This complex product is intended for people who have problems with cerebral circulation and are suffering from increased sensitivity to atmospheric pressure drops.

GRINVIT capsules - capsules for improving cerebral circulation - this neurocomplex is recommended to be used as an additional source of micronutrients, polyunsaturated fatty acids, antioxidant substances.

Flaxseed oil extract is a source of polyunsaturated fatty acids, of which the Omega-3 complex, which has the ability to counteract vascular sclerosis, is of the greatest importance in this context. The high content of active polysaccharides determines the antioxidant, antiviral, antibacterial and antitumor effect, increases the ability to withstand the negative effects of the external environment.

A very important property of MESL is the ability not only to prevent the development of sclerotic changes in blood vessels, but also to treat atherosclerosis, returning the vascular wall to purity and elasticity - of course, with prolonged use. This property of flaxseed oil has been established by numerous scientific studies. Scientists have proven that heart and vascular diseases affect primarily those people in whose body there is a reduced concentration of the Omega-3 complex. They are always a risk group.

It has a powerful restorative effect, it is successfully used for neurasthenia (nervous exhaustion), stress, chronic fatigue syndrome and to prevent premature aging. Its effectiveness has been proved in cases of cerebrovascular accident and in disorders of the blood supply to the retina. MEWC is indicated for all types of pathology of the cardiovascular system, in particular for coronary heart disease and atherosclerosis. It is well tolerated by older people, especially those with signs of chronic cerebrovascular accident.

Ginkgo biloba extract. The pharmacological action of ginkgo leaf extract is based on its ability to inhibit free radical oxidation, which is one of the main causes of tissue damage during ischemia and hypoxia. Due to its antioxidant properties, ginkgo extract has the following effects: nootropic, which increases mental performance, antihypoxic, improves microcirculation.

The flavonoids contained in the leaves of ginkgo biloba (myricetin, quercetin, bilobin) provide a decrease in capillary permeability and improve peripheral blood circulation. Ginkgo extract allows you to normalize the metabolism in the cells and the rheological properties of the blood, improves cerebral circulation and the supply of oxygen and glucose to the brain, has a pronounced decongestant effect.

Garlic is an amazing plant with a wide range of health benefits, of which, in this context, we are primarily interested in the effect on the cardiovascular system. It has long been known that garlic prevents atherosclerotic changes in blood vessels, expands them (relieves vascular spasm), normalizes blood pressure, increases the amplitude of heart contractions and normalizes their frequency.

Scientific studies of recent years have shown that garlic is able to reduce blood cholesterol by 20% per month course of treatment. Along with this, garlic also has pronounced anticoagulant properties, which makes it a valuable product for the prevention of thrombosis. According to recent years, garlic has the ability to dissolve cholesterol plaques in vessels (with prolonged use). It also has a beneficial effect on digestion, acts as a diuretic, improves mood and has a mild sedative effect.

Act:
- restoration of cerebral circulation;
- gradual resorption of sclerotic seals in the walls of arterial vessels;
- increase the elasticity and strength of the vascular walls;
- a decrease in their tendency to spasm and the formation of blood clots (blood clots) in them - and therefore, the prevention of both ischemic and hemorrhagic forms of stroke;
- regular intake of capsules gradually reduces, and then negates dizziness and tinnitus, improves memory, restores intellectual abilities, improves overall well-being and the state of the psycho-emotional sphere;
- it becomes easier to tolerate sudden changes in atmospheric pressure and adverse atmospheric phenomena;
- improves the state of cerebral circulation in stroke survivors, provides more reliable protection against repeated vascular catastrophe.