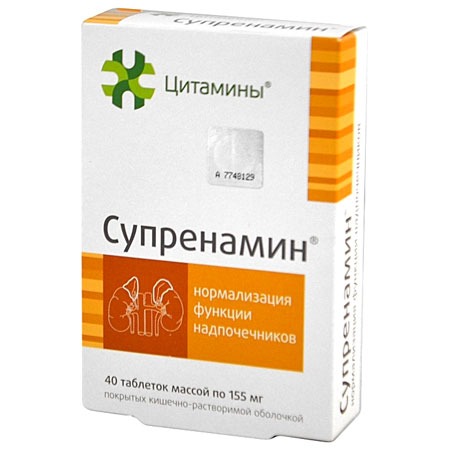 Adrenal glands of internal secretion play a significant role in the normal functioning of the human body. Different groups of hormones (mineralocorticoids, glucocorticoids, androgens and estrogens) produced in the adrenal tissues, affect the processes of growth, stress response, sexual maturation, and metabolism on a number of other processes. Adrenal function suffers from various hereditary diseases, tumors, trauma and extreme loads. For correction and prevention of pathological changes occurring in various diseases of the adrenal glands, developed "Suprenamin."

Clinical trials of "Suprenamin" conducted on 195 patients with chronic insufficiency of the adrenal cortex and the condition caused by prolonged exposure to stress factors of various origins and strength.

In patients with chronic insufficiency of the adrenal cortex was dominated by complaints asthenic character, and patients, long time to be in the professional and emotional stress, increasingly complained asthenic-depressive character.

While taking "Suprenamin" patients with chronic insufficiency of the adrenal cortex observed recovery of metabolic activity of the adrenal zona reticularis, accompanied by increased production of sex hormones (androgens and estrogens).

Using "Suprenamin" in people for a long time been subjected to extreme stress influences contributed to the restoration of disturbed hormonal metabolism of glucocorticoids and sex hormones, which reflects the normalization of the functions of the endocrine system.

"Suprenamin" recommended for use in complex therapy for normalization of hormonal metabolism in various diseases and disorders of adrenal function, prolonged exposure of professional and emotional stress. It's also recommended to the elderly to maintain the function of the endocrine system.