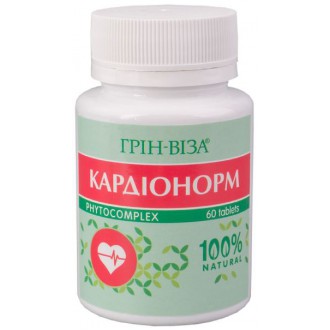 One of the three active components of Cardionorm is hawthorn.

The generic name of the hawthorn Crataegus (categus) comes from the Greek cratanos (kratanos), meaning strong, strong. This name hawthorn received for its outstanding durability and resistance to adverse conditions. Individual specimens live up to 400 years.

Hawthorn has an extremely beneficial effect on the cardiovascular system due to the complex action of its biologically active substances. They dilate the blood vessels of the heart, increase coronary blood flow, reduce the frequency and increase the strength and effectiveness of heart contractions. It has been proven that hawthorn reduces blood pressure and helps with heart rhythm disturbances, especially in menopause.

Clinical studies have shown that hawthorn significantly improved objective (ECG) and subjective (palpitations, pain and heaviness in the heart) indicators in patients with coronary heart disease and hypertension. The sedative effect of hawthorn is widely known. Studies have shown a decrease in cholesterol and the antioxidant effect of this plant.

Indications for the use of hawthorn are also vegetative-vascular dystonia, nervous agitation, sleep disturbances. It is also indicated as a prevention of cardiovascular disease and premature aging. In mild forms of atrial fibrillation and tachycardia, hawthorn is prescribed in addition to treatment with basic antiarrhythmic drugs. Among the people, the fruits of hawthorn are considered a good remedy for colic with kidney stones, as well as with cough and other lung diseases. In heart disease, a common symptom is sleep disturbance.

The effectiveness of hawthorn in this case enhances valerian.

Valerian has a sedative, tranquilizing effect on the central nervous system, regulates cardiac activity, has antispasmodic and choleretic properties, enhances the secretion of the glandular apparatus of the gastrointestinal tract.

Valerian preparations have a positive neuroregulatory effect on the activity of the heart muscle and directly on the basic mechanisms of heart automatism and the conduction system. In addition, agents containing valerian possess coronary-expanding and hypotensive properties.

Valerian is more effective with systematic and long-term use due to the slow development of a therapeutic effect. In medical practice, valerian is indicated for chronic functional disorders of the nervous system, hysteria, epilepsy, convulsions, acute excitations due to psychological trauma, for mild forms of neurasthenia and psychasthenia, manic-depressive states, migraine, neuralgia, neurodermatitis, and for chronic disturbance of coronary circulation; for the treatment and prevention in the early stages of angina pectoris, hypertension, with heart defects; with some diseases of the liver and biliary tract, diseases of the gastrointestinal tract associated with impaired secretory function, pre and menopausal disorders, in the complex treatment of diseases of the oral cavity (used for tooth drops).

The biologically active substances contained in the plant’s flowers used by us reduce blood viscosity and increase blood supply to the veins and their tone, especially if venous patency is impaired. They increase the tone of venous vessels in almost all parts of the vascular system, and therefore, affect the normal functioning of many organs.

Esculin, in particular, reduces the permeability of capillaries, stimulates the antithrombotic activity of blood serum, increases the production of antithrombin in the reticuloendothelial system of blood vessels, and strengthens the blood supply of veins, especially if there are pathological changes in them. That is why formulations including chestnut flower extract have long been used for varicose veins, diseases of the liver, gastrointestinal tract, women's diseases, colds, radiculitis and joint pain. Even chestnut coffee recipes are known to treat indigestion.

Improvement in taking Cardionorm occurs in 3-4 weeks. However, a lasting effect can be achieved only by prolonged and regular use for 8-12 months or more.