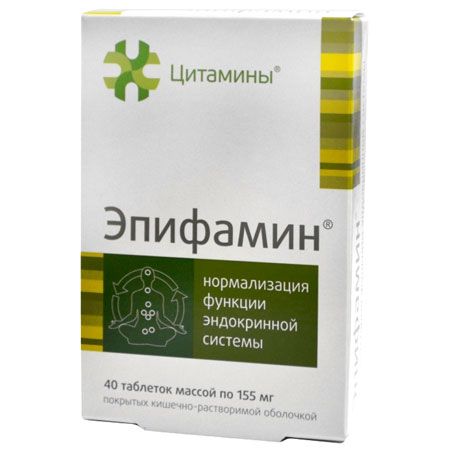 Corrects and improves the functioning of the hormonal and immune systems, normalizes sleep and wake modes, has an antioxidant effect.

The significance of the pineal gland as the endocrine glands is extremely high. The pineal hormone - melatonin has a wide range of influence on the functions of various body systems (antioxidant, hormonal, vascular). With the participation of the epiphysis occurs regulation of cyclic rhythms in the body, melatonin has a direct impact on sleep, glucose metabolism, vascular tone, and lipid metabolism. When oppression of the epiphysis occurs significant activation of involutional processes that lead to accelerated aging of the body, so for the correction and prevention of disorders of the pineal gland, occurring in various diseases, developed "Epifamin."

Clinical trials of "Epifamin" conducted on 167 patients with fiziogennoy asthenia, severe manifestations of female menopause, dyshormonal myocardiodystrophy, and in cancer patients against radiation and chemotherapy.

Evaluating the effectiveness of the use of "Epifamin" made ​​on the basis of the dynamics of subjective complaints and objective indicators of laboratory and instrumental studies, and special methods of control over the state of psycho-emotional sphere.

Good therapeutic effect of "Epifamin" was found in patients with cephalgic syndrome, non-systemic symptoms of dizziness and emotional instability. In applying the "Epifamin" together with "Vazalamin" was marked by a smoothing effect on pseudo bulbar symptoms in patients with sequelae of stroke. Traced as a stable trend in the alignment of focal symptoms during treatment with symptoms of prolonged aftereffect.

During the course taking of "Epifamin" patients dyshormonal myocardium dystrophy established reduce the number and intensity reduction cardiological attacks, increase efficiency and normalization of mental and emotional state, the positive dynamics of electrocardiographic parameters. The studies found corrective effect of "Epifamin" on hormonal metabolism, contributing to the normalization of myocardial metabolism. Marked clinical effect makes sharing "Epifamin" with "Ovariamin" in the correction of pre- and menopausal disorders.

"Epifamin" as used in the adjuvant therapy in cancer patients, mainly in hormone-dependent tumors, amid persistent leuko- and lymphocytopenia developed after radiotherapy and chemotherapy. "Epifamin" used to stimulate hematopoiesis and immuno- and prepare for the comprehensive treatment. The majority of persons surveyed prior to use of the drug, immediately after admission and after 20-30 days after receiving the peripheral blood was observed a significant increase in the total number of lymphocytes and T-lymphocytes in the blood, as well as the improvement of the functional activity of T cells. The drug patients reported increased muscle tone and improve appetite.

The results of the application of "Epifamin" together with "Hepatamin", "Pankramin" and "Renisamin" in cancer patients undergoing radiation and chemotherapy, suggests that the use of "Epifamin" improves overall health, hematological and immunological parameters, which in turn, prevents the development of infectious and other complications and improves quality of life in these patients.

"Epifamin" recommended for normalizing hormonal metabolism, regulation of immunity in various forms of violations (including after radiotherapy and chemotherapy), it is also recommended to the elderly to maintain the function of the endocrine system.

1-3 tablets 2-3 times a day for 10-15 minutes before meals with water without chewing. Course: 10-14 days. Repeated course on the recommendation of a physician.