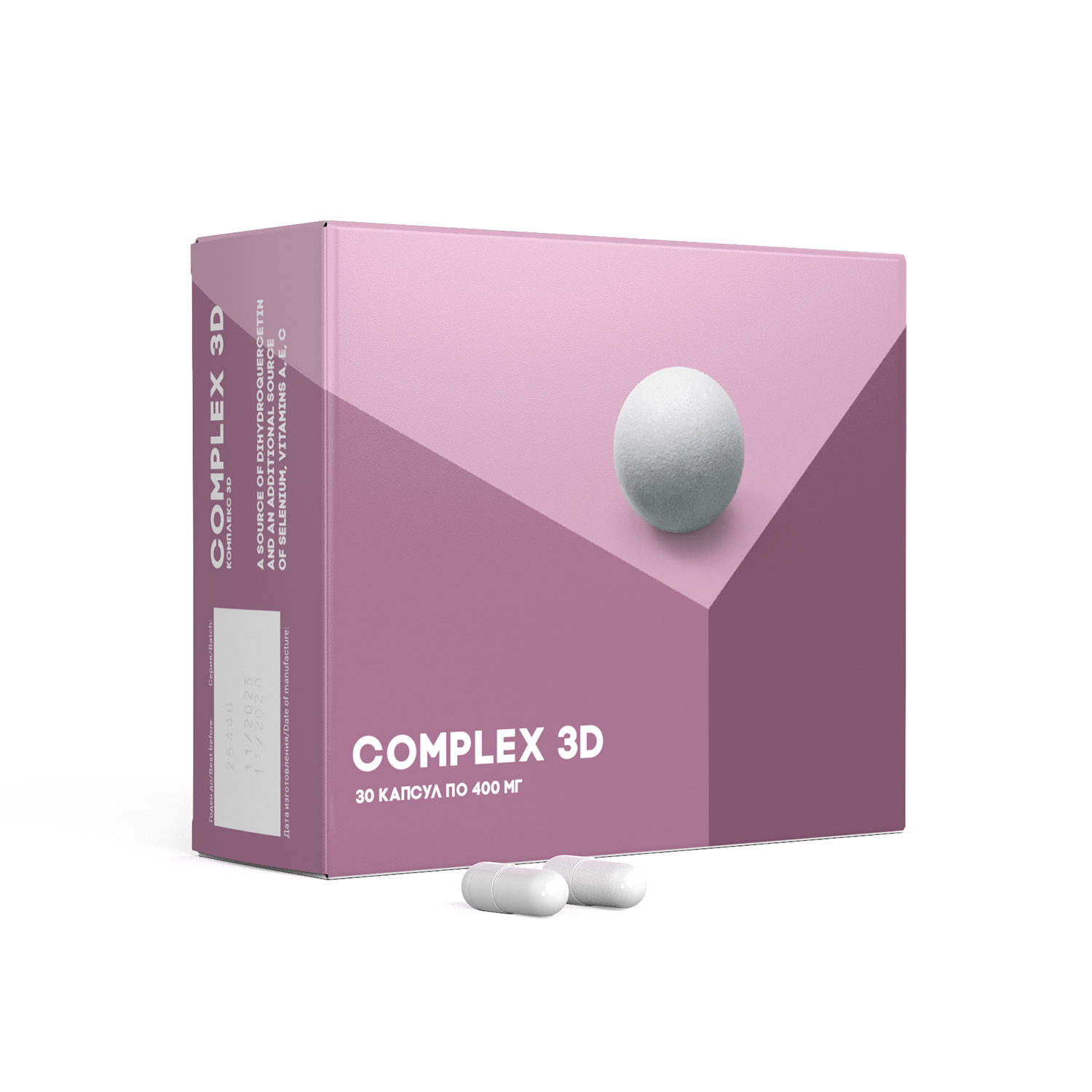 The complex “2 in 1” preparation based on detoxicants and antioxidants. Due to the presence of such active ingredients as tripeptide glutathione, SOD and catalase, dihydroquercetin, the drug is able to solve several problems at once: slow down the aging at the cellular level, prevent intoxication caused by the glycation process, provide regenerative, anti-inflammatory, immunoprotective and angio- and hepatoprotective effects .

Preparation is aimed at accelerating the second phase of detoxification. Reduces the level of chronic inflammation in the connective tissue and vascular wall, which is especially important for atherosclerosis, phlebitis.

For adults — 1 capsule per day with meal, during 4–6 weeks. If necessary, you can repeat the course. There may be repeated practices during the year.

Is a mild detoxifier and one of the most powerful antioxidants, the main "collector" of free radicals inside the cell. Glutathione prevents the development of uncontrolled inflammatory reactions. By regulating the activity of eicosanoids, it is able to reduce the activity of pro-inflammatory cytokines, reducing the concentration of C-reactive protein and other inflammation factors. The glutathione system is the main intracellular antioxidant defense system and determines the redox status of the intracellular environment. Glutathione supports the functional activity of the thymus and prevents its age-related involution. The presence of glutathione allows ß-lymphocytes to attach to the antigen and, if necessary, to separate to attach to the next, maintaining their activity and reducing the load on the bone marrow, spleen and lymphatic system, preventing the development of autoimmune and allergic diseases, as well as preventing their development after infections. The glutathione system has an antimutagenic effect and prevents damage to the DNA of cells and the degeneration of normal cells into cancer cells. It restores other antioxidants, such as vitamins C and E (after neutralizing free radicals, they themselves can become unstable molecules). It is a cofactor of another powerful antioxidant enzyme - glutathione peroxidase.

Provide the intake of the main antioxidant mineral in a controlled dosage. In the process of enzymatic selenization of amino acids, brewer's yeast transforms inorganic selenium into organically bound, which significantly increases the bioavailability of the trace element and its safety. In the body, organically bound selenium is better absorbed than its inorganic analogues and forms selenomethionine and selenocysteine. Thus, selenium-enriched brewer's yeast effectively and safely eliminates selenodeficiency by providing the expression of selenoproteins and selenium-dependent enzymes, such as glutathione peroxidase, one of the main antioxidant enzymes that can inactivate reactive oxygen species and ensure the integrity of cell membranes and membranes of cellular organoids . Low concentrations of selenium inhibit the release and accelerate the degradation of histamine, providing anti-allergic effect and antidystrophic effect. Selenium regulates the function of the thyroid gland, improving the absorption of iodine and being a component of deiodinases, which convert thyroxine (T4) to the more active triiodothyronine (T3). Selenium normalizes the function of the sex glands, promotes the process of maturation of germ cells and improves spermatogenesis. It is part of the proteins of muscle tissue and myocardium, preventing their dystrophy and supporting functional activity. Participates in the metabolism of nucleic acids and DNA repair.

A conditionally essential amino acid. It is part of alpha keratin, the main protein of nails, skin and hair, promotes the formation of collagen, improving the elasticity, structure and texture of the skin. Cysteine, like many proteinogenic amino acids, is part of the human structural protein, including skeletal muscle protein, accelerates recovery after exercise, stimulates muscle growth. Cysteine ​​reduces liver damage caused by the use of drugs, alcohol, and oral steroid medications. Restores damaged liver cells and optimizes their work. Due to its antioxidant properties, cysteine ​​prevents the oxidation of cholesterol, which is one of the factors in the development of heart and vascular diseases. Helps neutralize certain toxic substances. It has the ability to bind and accelerate the evacuation of heavy metals and soluble iron. It is the precursor of another powerful antioxidant - glutathione and increases the level of glutathione synthesis.

It has a powerful anti-inflammatory and anti-allergic effect. Able to accept free radicals and bind metal ions that catalyze oxidation processes. It has chemoprophylactic properties, interacting directly with activated carcinogens and toxins, binding them to a stable form and helping the body to eliminate them. It has the ability to actively "extinguish" hydroxyl radicals, which are the main agents under the action of ionizing radiation, increases tissue resistance to the damaging effects of hard radiation and high-energy flows in a wide range. It improves the functional state of the cardiovascular system: it helps to optimize the main and peripheral blood flow, normalizes the permeability of the vascular wall, and restores the tone of blood vessels. Improves rheological properties of blood, optimizes lipid metabolism and lipid profile of blood, prevents the formation of atherosclerotic plaques and blood clots. It increases resistance and reduces the risk of destructive changes in cells and tissues of the body under hyperglycemia, reducing the rate of increase of structural changes in the islets of Langerhans, reducing the likelihood of developing diabetes, and also facilitating the course of diabetes-related complications.

Natural source of SOD (Superoxide Dismutase). Superoxide dismutase is one of the key components of the system for protecting cells and tissues from oxidative degradation; it neutralizes the superoxide radical with the formation of hydrogen peroxide. It is a radioprotector, effectively protects cells from damage by ionizing radiation. Folic acid stimulates the proliferation of fibroblasts, the synthesis of collagen and elastin, affects the remodeling of the cell matrix, interferes with the glycation process and reduces collagen degradation. The extract has a high anti-inflammatory activity and activates DNA repair.

An enzyme that is capable of catalyzing the decomposition of hydrogen peroxide formed during biological oxidation into water and molecular oxygen, providing effective protection of cellular structures from degradation. Catalase reacts only at sufficiently high concentrations of hydrogen peroxide accompanying oxidative stress, urgently restoring the balance between the formation and elimination of free radicals and preventing the development of uncontrolled inflammation.

It is a universal protector of cell membranes from oxidative damage, inactivating free radicals and thereby preventing the development of free radical processes of peroxidation of unsaturated lipids. Participates in the biosynthesis of proteins, cell proliferation, prevents the increased permeability and fragility of capillaries. Vitamin E regulates muscle activity, preventing fatigue; acts as an important regulator of protein metabolism in the muscles and affects the normal functioning of the gonads. The oxidized form of vitamin E goes into a reduced form, reacting with ascorbic acid.

Belongs to fat-soluble vitamins. The overall effect of retinol is due to increased myelopoiesis, macrophage function, and reactions of humoral and cellular immunity, which helps to activate the body's defenses. It plays an important role in redox processes (due to the large number of unsaturated bonds). Stimulates the proliferation and differentiation of cells of rapidly renewing tissues - cartilage, spermatogenic epithelium, placenta, skin epithelium, mucous membranes, cells of the immune system and blood. Participates in the synthesis of mucopolysaccharides, proteins, lipids. In the skin, it inhibits keratinization processes, enhances the proliferation of epithelial cells, rejuvenates cell populations, reduces the number of cells along the path of terminal differentiation.

It has pronounced antioxidant properties. Acting as a coenzyme, it forms a redox system (redox pair) and in this form is capable of accepting and donating hydrogen atoms, neutralizing the superoxide radical to hydrogen peroxide. Vitamin C regulates immunological reactions (activates the synthesis of antibodies, the C3 component of complement and interferon), promotes phagocytosis, and increases the body's resistance to infections. It has a pronounced anti-inflammatory and anti-allergic effect: it inhibits the release and accelerates the degradation of histamine, inhibits the formation of prostaglandins and other mediators of inflammation and allergies. Participates in the hydroxylation of the amino acids of proline and lysine, necessary for the synthesis of procollagen and its conversion into collagen during the construction of the mesh basis of the organic matter of bone, cartilage, and filling the intercellular spaces with regenerative connective tissue. Provides the synthesis of hyaluronic acid and its polymerization, inhibits hyaluronidase. Maintains normal capillary permeability.

Scientific and Production Center of Revitalization and Health